One of the basic skills we need to acquire when learning organic chemistry is the ability to decipher the drawing that illustrates the organic compounds. Sometimes they come in lines with letters, sometimes grouped together and maybe sometimes, hardly any letters at all, just lines. Being able to “read” these structures will pave the road to success in conquering whatever is next – identifying functional groups, drawing isomers, naming compounds, etc. Basically, there are 3 common ways organic compounds are drawn. They are:

When we graduated from drawing Lewis structure successfully, chances are high, our structure looks like this (the “expanded” image below). We draw out all of the bonds connecting all of the atoms in the compound. Sometimes, we may even include the lone pairs on the atoms. This is called the Expanded structural formula. The name says it all, all of the bonds are expanded (shown). 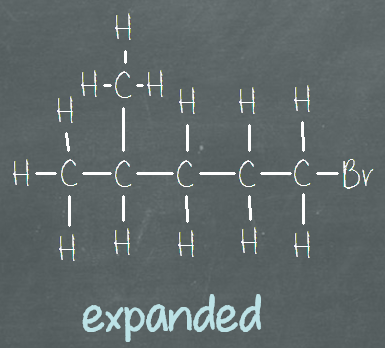 Since organic compounds contain mostly carbons and hydrogens, it can be pretty tedious to draw out every single bond. Therefore, they can be grouped together, into the Condensed structural formula. Normally, the vertical bonds and most of the horizontal bonds are not shown. Refer to the three images shown below for condensed formula. All three of them represent the same type of formula, only different by how the C-C bonds are represented. We don’t show the bonds connecting carbons and hydrogens in this form, but all of the atoms are shown in the structure.

I used three examples (alkyl halide, alkene and carboxylic acid) to demonstrate how to draw the three structural formula – expanded, condensed and skeletal form. Do check it out here: